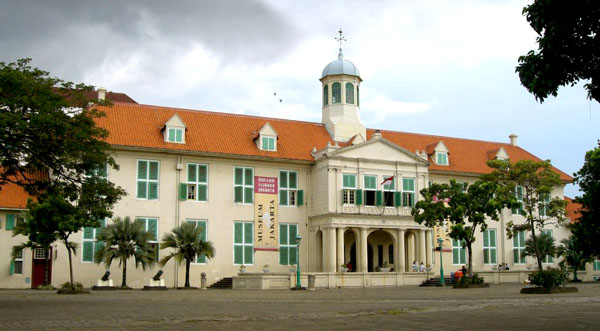 Jakarta is the capital of a beautiful country called Indonesia and it has become a center of government for decades. Aside from being a business and governance center, it also has a splendid history and culture. For example, there is one called Kota Tua or Old Old Town. As the name suggests, it holds numerous historic structures, which were used during the colonialism era. The fact is Jakarta (Batavia) was once considered a strategic spot to trade during the 16th century. Today, the site becomes tourists’ favorite destination to hang out and feel the old atmosphere of the city.

The Nuance
Kota Tua Jakarta or the Old Town of Jakarta is located in Kunir Street 23 A, Tamansari. It belongs to West Jakarta City, actually. Despite the small size, which is about 1.3 km2, it has lots of attractions including historical buildings and several spots to hang out. Most of the structures are old museums, but an old harbor also resides near to the area. Tourists usually come there during the afternoon or at night when the nuance feels more comfortable. Some people are also seen in the morning as they enjoy fresh air and do some sports like jogging.

Exploring Jakarta Old Town
Due to its historic atmosphere, Jakarta Old Town is suitable for walking around and jogging. That means visitors can take advantage of the nuance to find peace and eradicate stresses. They can explore the area and see numerous old buildings land museums. Some parts of it are used by local vendors to promote their items, as well. These include foods, accessories, etc. For those who want to visit the museums, they must come before 3 pm (the closing hour). The thing is they should avoid coming at noon when the temperature is hot. Thus, the best time to visit is in the morning.

The main charm of Old Town is the formation of old museums, which are scattered near to each other. These include Bank Mandiri, Bank Indonesia, Arts & Ceramics, and Wayang Museum. Each of them offers distinct beauty so tourists should visit them all. As mentioned before, visitors should come before the closing hour. For those who look for a simpler activity, they can enjoy riding a bike around the area. Have no worries. Some locals provide bikes for rent to tourists and the price is quite affordable.

Another unique attraction in Jakarta Old Town is the presence of local artists, those who dress like a statue, soldiers, Dutch lady, and much more. They move around the area and often become an object for photography. Visitors are even allowed to take pictures with them, in fact. At the end of the adventure, tourists should enjoy local snacks called Kerak Telor. It is both crispy and tasty!

How to Get There
The best transportation service to use to reach Kota Tua Jakarta (Jakarta Old Town) is the commuter line. The fact is that the area is accessible from any location, so it is quite reachable. For those who don’t want to feel any hassle, riding a taxi is the simplest way to head to the site despite the expensive fee.

As the capital city of Indonesia, Jakarta is not only famous for its skyscrapers and the title as one of the largest metropolitan cities in the world. There are many other unique things that Jakarta has to offer, one of them is the creative typical product of Betawi—the native people of Jakarta. As is known, Betawi tribe who inhabit Jakarta as well as parts of West Java and Banten have unique cultural products. For example, lenong. However, as time goes by, the existence of lenong is increasingly displaced and it…

Things That Make Tourists Surprised While on Vacation to Kepulauan Seribu

For Indonesians, the name of Kepulauan Seribu is already familiar. However, it is different from foreign tourists who rarely hear about the beauty of these islands. They do not think that there is a beautiful natural tourism that is not far from Jakarta. Want to know more details? When boarding the ship to Seribu islands, foreign tourists find it difficult to communicate with the ship’s crew, because most of them do not speak English. This is because the crew in Kepulauan Seribu are mostly local people who do not speak…

Istiqlal Mosque is one of the halal tourist destinations in Indonesia. The construction process in a number of areas of the largest mosque in Southeast Asia has been completed and has made it ready as a place of worship, study, as well as tourism. The Istiqlal Mosque has become an icon of Indonesia. Many tourists and national heads who visited Indonesia then saw the beauty of the Istiqlal Mosque. If you enter to the mosque, with five floors and one ground floor, you will see the splendor of modern architecture…

Jakarta City always becomes the center of tourism, especially for foreigners who spend a vacation in Indonesia. It is the capital city of the nation, after all. That means Jakarta becomes a perfect checkpoint before visiting other regions. Aside from that, it also has tons of attractive vacation spots that offer different themes. For instance, there is the MACAN Museum in Kebon Jeruk Sub-District. Tourists only need to reach Perjuangan 5 Street in order to get to the museum. So, what is in there? Well, the official name is the…

Hotel Deals of the Day