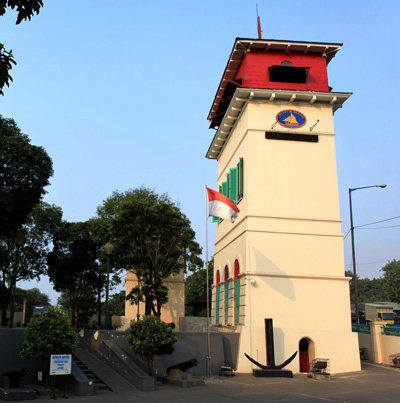 As a capital of Indonesia, Jakarta Special Region holds many important roles. One of them is to lure more local and foreign tourists. In this case, the Old Town area becomes its prime mainstay to tourism. In the location, people can find lots of valuable buildings that hold imperative history. Two of them are called Syah Bandar Tower and Bahari Museum, which are located close to each other. The tower was part of the Dutch Colonialism, built in 1839. It was built as a watch tower and a guard post in Batavia. When it comes to Bahari Museum, it was constructed in 1652. The function was to store spices back then. Today, both of them become significant tourists’ attractions in Jakarta.

The Nuance
Syah Bandar Tower has the width of 4x8 meters and the height of 12 meters. It appears a bit slating, so local people often call it “Menara Miring” or Sloping Tower. The fact is that the tower would move when a big vehicle pass by in the street. What about Bahari Museum? The structure looks well-maintain and it comes with sturdy pillars. Not to mention the air circulation functions well. The museum was inaugurated in 1977 by the government, actually. It was a warehouse, but now it becomes one of the best attractions in the Old Town area.

Exploring Syah Bandar Tower and Bahari Museum
It is fun to explore both the structures. In the front part of Syah Bandar Tower, visitors can see an inscription and Ali Sadikin’s sign. Here is the fact. The tower was Jakarta’s 0 KM back then. However, the government chose National Monument to replace it in the 1980s. There is also a steel door, which becomes the prime entry to the underground path and connects to Istiqlal Mosque. Actually, the best spot to reach is the top of the tower, on which tourists can witness cityscape and beautiful views from the window.

What is inside the tower? The most attractive feature is the Chinese letters that say “the 0 KM of Batavia”. Also, the tower features 3 rooms, having different functions back then. Once tourists explore the interior of the tower, it is time to see the attractions outside. There are 7 cannons out there. No wonder, Syah Bandar Tower was a guard post. Next, tourists can walk to Bahari Museum and witness some historical objects there. Some collections of historical maritime items are stored inside. These include boats, replicas, sailing navigation, and pictures.

The most attractive objects in Bahari Museum are definitely the boats. The guests can see some traditional boats of Indonesia such as Jukung Karere, Lancang Kuning, and Phinisi! They are both beautiful and majestic! Moreover, some modern boats are also displayed there.

How to Get There
Both of the buildings are located near to Old Town Area and Penjaringan. In this case, the best transportation service is a taxi, as it may deliver passengers directly to the location. The fee is a bit pricier than buses, though.