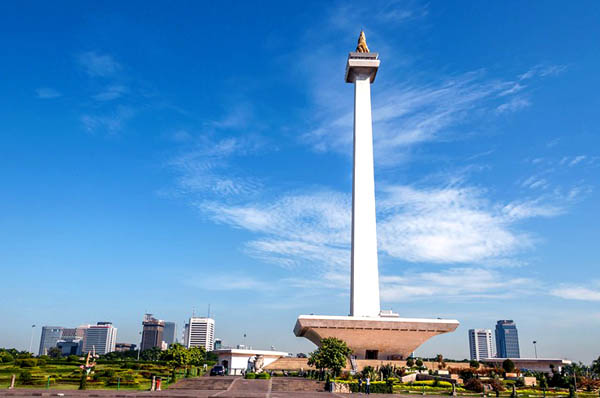 Jakarta Special Region also becomes a worthy vacation spot to visit. Thanks to the presence of the Old Town, where people can explore various historical museums. Not to mention many family recreational places are available like TMII, Sea World, Dufan, etc. Here is the thing. There is an icon of tourism in Jakarta, which is National Monument. Due to its popularity, almost all travelers recognize it. Simply said, the monument was built to commemorate the struggle of the locals to obtain their independence from invaders.

The Nuance
In terms of shape, the monument is unique. It has the height of 132 meters and it is situated in the midst of a giant park. It resides in Medan Merdeka – Central Jakarta Street, so tourists can easily notice it. On the top of the monument, there is a flame statue, which is made of gold! It becomes the main feature of National Monument, after all. Once the guests enter the monument, they might find numerous documentations regarding the fights of Indonesian during the invasion era. Not to mention there is an Independence Room, on which many national history files of Indonesia are stored.

Exploring National Monument
The monument offers many attractions to tourists. For example, the guests can learn a bit of the history of such landmark. According to the locals, it was built in 1961. It was during the reign of the first president of the nation (Soekarno). At that time, the monument wasn’t open for public. It was in 1975 when the government decided to open National Monument to tourists. The golden fire of the monument represents the spirit of the locals during the war against invaders, actually. No wonder, it becomes a symbol of patriotism of the nation as well.

Next, it is related to the design. National Monument was inspired by Eiffel Tower of France, which becomes a symbol of nation’s revival. No wonder, the monument becomes tourists’ favorite object when it comes to photography. They can take pictures either from the outside or inside the monument. Due to the presence of the garden, they can also enjoy a serene nuance in the afternoon. Some locals even come in the morning to do sports like jogging and badminton. That means it offers more than historical values to the guests.

Once visitors get in the monument, they can start to go up using a lift. From the location, they are allowed to use a telescope to witness the views of Jakarta. However, the upper yard of the monument can only accommodate 50 people. Due to this reason, it is better to come in the morning or during working days. At those times, the number of visitors is not as much as in weekends. Don’t forget to observe all historical reliefs and dioramas when exploring the monument!

How to Get There
Monument National is accessible from different locations. For those coming from other provinces, a flight to Halim Perdana Kusuma is a must. Next, they need to head to Cawang UKI by local transportation service and take Trans Jakarta to Cempaka Mas 2. Another route is to Gambir 1 Bus Stop. From there, tourists should walk a bit to reach the monument.