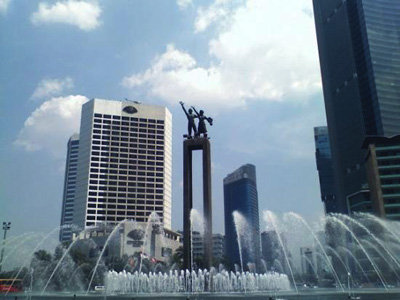 Many references are available when it comes to a vacation in Jakarta Special Region. It is a simple as visiting Selamat Datang Monument, which is located in Indonesia Hotel Roundabout or “Bundaran HI”. The monument stands in a city pool and it is surrounded by big buildings. In weekends, people come to the site for relaxing, doing sports, cycling, and buying snacks from local food stands. That means it becomes a suitable place for tourists to relax and sightseeing. Not to mention the location is quite reachable, so everyone can notice it easily.

The Nuance
As mentioned before, the monument is located in the midsts of a roundabout and it is surrounded by tall buildings. The height of the monument is about 30 meters. On top of it, there are statues of a man and a woman. Their pose is similar to waving, which represents the openness of the nation. In fact, Selamat Datang means “welcome”. The statues are made of bronze and their height is 7 meters. The female statue even carries a bucket of flowers, representing a gesture of welcoming guests. No wonder, everyone would notice such majestic monument, especially those who are passing by HI Roundabout.

Exploring Selamat Datang Monument
Mostly, visitors come to learn the history of the monument. According to locals, it was built in 1962. The government constructed Selamat Datang Monument to show warmness to foreign athletes, who were participating in Asian Games IV. Such even was done in Jakarta, after all. The idea came from the president and it was realized by Henk Ngantung (the vice Governor of Jakarta). Who were the sculptors, actually? They were no other than Edhi Sunarso and his team. The project took a year and it was inaugurated in 1962 by Soekarno – the first president of Indonesia.

Apart from the history, people come to the monument for other reasons. It is as simple as photography. The shape and features of the landmark are quite astonishing, after all. The thing is tourists should find the right spots to capture some pictures. It is because the monument is situated in a crowded roundabout. That means photography would be both fun and challenging! As an alternative, tourists can reach the pedestrian bridge, which is located near to the monument. It has been chosen as the best spot for photography and sightseeing, in fact.

As for tips, visitors should come at night. Why is that? The lamps glow beautifully around the pond. Not to mention the nuance becomes more serene and romantic. Plus, the traffic seems better than other times. That means photography would be easier at night. The next tip is related to money. Visitors should not forget to carry enough cash, as they need it to buy drinks or snacks later.

How to Get There
Selamat Datang Monument is located in Menteng Sub-district, Central Jakarta City. For those coming from Soekarno-Hatta Airport, it takes only 30-40 minutes by taxi. The distance between the airport and the monument is 29.6 km. As for the tip, the best route to take is Jakarta Inner Ring Road.