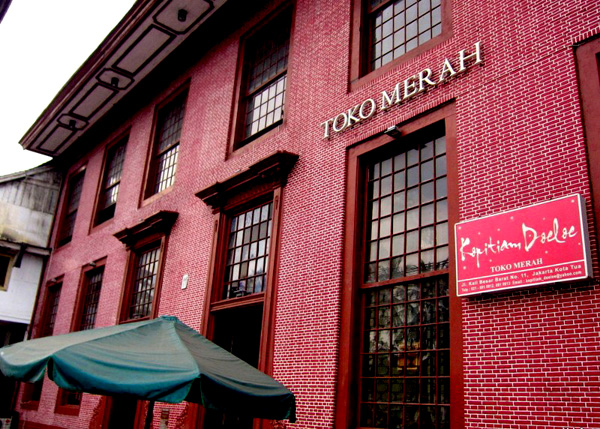 It is true that some tourists are into historical tourism. That means they want to visit old places that have valuable history and a unique appearance. In this case, there is the Toko Merah, which is located in Jakarta Special Region. The fact is the building was part of the Dutch Colonialism. It was built in 1730 and becomes one of the oldest structures in Jakarta. Not to mention it is part of vacation spots in the Old Town area. Even though it was the home of Governor Gustaaf Willem, it has become an interesting vacation destination among tourists these days.

The Nuance
Toko means “store” and Merah means “Red”. As the name suggests, the color of the building is predominantly red. Despite the regular size, the structure features tall doors and windows, which represent colonialism era. It was the remnant of VOC, after all. Here is the next important thing. The location of the building is in the roadside, so tourists won’t be troubled in finding it. Also, there is a parking lot for motorcycles in front of the structure. On the wall, visitors can see a clear sign of “Toko Merah”. What a noticeable place!

Exploring the Red Store (Toko Merah)
Being a historical building makes the Red Store popular among tourists. In fact, it also attracts some historians over time. The structure is made of red-painted bricks and it has a good condition despite the age. Apart from witnessing such majestic building, people also come to the location for its history. As mentioned earlier, the structure belonged to VOC’s important person. The man took part in the plan of eradicating all Chinese people living in Batavia. It is said the river blood occurred during such genocide, which was done near to the Red Store.

Despite the gloomy history, the building remains popular among tourists. Most of the visitors come to the location for selca and sightseeing. Some of them also gather information regarding the history of the Red Store. In this case, they need to talk to their tour guide or local people about it. What’s next? Another popular activity to do is conducting pre-wedding photo session. Somehow, the old and unique appearance of the building becomes a recommended background for a pre-wedding picture. On top of that, no money is involved for doing those activities.

So, what is inside the Red Store? Many rooms are available either on the base, first, or second floor. Not to mention there are a hall and bedrooms. All of them are appealing! In fact, tourists are allowed to carry either a camera or a Handycam. When it comes to the environment, the building is quite neat and clean. No wonder, visitors feel comfortable when exploring it.

How to Get There
Toko Merah is located in West Kali Besar Street 11 and it belongs to Tambora Sub-district. Many types of transportation services are available, including buses, train, ojek, and taxis. Tourists only need to choose one based on their budget and preferences.