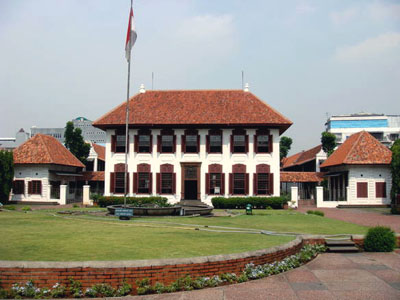 What makes Jakarta Special Region famous? Well, it can be as simple as its tourism. Many types of tourist attractions are available, including National Archives Museum. What is it, exactly? Despite the name, the museum doesn’t store any archives of the nation. It is because the government has relocated the documents to a new building. Today, tourists can only see historical objects and antiques inside the museum. They also take advantage of the location to perform photography. Thanks to beautiful garden and landscape of the building. Overall, it is a nation’s valuable structure, on which tourists can visit freely.

The Nuance
When it comes to the size, the building has a moderate width. Still, it emits a majestic aura due to its beautiful design. The structure applies the symmetrical concept and comes with extra buildings on each side of it. There is even a u-shaped structure there in the back of the museum. In that area, visitors can find an open garden, which is quite vast. In the same location, there are a couple of old cannons and ornaments. Due to its serene nuance and wide size, the garden often becomes a wedding venue and a spot to conduct events. The fact is that it can accommodate more than 1,000 people.

Exploring National Archives Museum
As mentioned before, no archives or documents are seen inside the museum. There are only ancient objects like old brankasts. The others are old compasses, ancient ships models, weapons, etc. All the items that reside inside the building emit a strange aura, actually. It is because of their age! Despite such mysterious aura, most visitors are brave enough to explore the building and take some pictures of the objects wholeheartedly. Have no worries. The keepers allow the guests to bring a camera inside. The only rule is that visitors should not litter and touch any items carelessly.

Here is the fact. Tourists don’t need to pay the entry fee. That means everyone is able to enter the building freely. With this fact, more people are interested in visiting the museum. Even foreigners are often seen there. They can explore both exterior and interior of the building. All of the structures look great even though no one takes care of it. Thanks to people’s awareness of the cleanliness of the building. That means all tourists would feel comfortable when exploring the museum. Even the toilets are clean and neat.

Some people consider National Archives Museum similar to Semarang’s Lawang Sewu. It is because the building consists of many tall doors and windows. However, it has a distinct uniqueness, which is a beautiful garden in the back of the building. Many people have acknowledged it as a recommended location for a wedding venue, in fact. Therefore, visitors should not miss the garden when coming to the museum.

How to Get There
National Archives Museum is quite reachable, as it is located in the downtown. Tourists only need to head to Gajah Mada Street by any available local transportation services, especially Trans Jakarta. In this case, they need to take K1 or corridor 1. Also, they need to get off the bus once they reach Mangga Besar Bus Stop. That’s all.