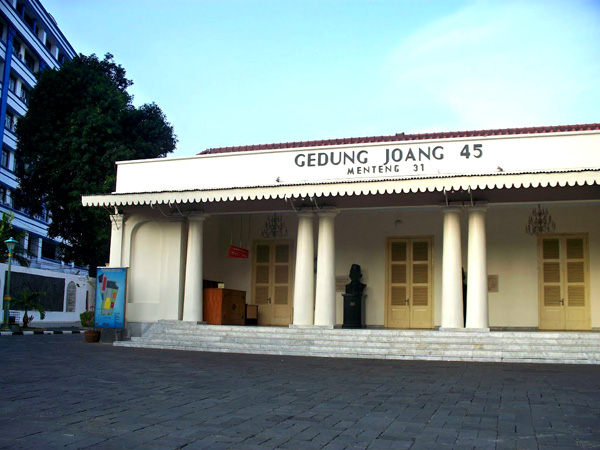 Jakarta Special Region is known for both its beauty and history. No wonder, tourists can find many historical places there, including Joeang 45 Museum. Despite the old age, the building retains its good condition and it becomes a recommended tourist spot for everyone these days. The location is in Menteng Sub-district and it is situated near to Pak Tani Statue. According to locals, the museum was built in 1938. At that time (during the Dutch Colonialism), it was used as an inn called Schomper Hotel. Later, Nippon invaded Batavia and used the building as a Propaganda Department.

The Nuance
In terms of appearance, the building is considered small and unique. It applies the Dutch Architecture, as well. The color is white and it features some big pillars in its front part. Two figures are placed near to the main door as ornaments. They are none other than Soekarno and Hatta – the first president and vice president of Indonesia. Not to mention some guards are seen near to those figures. Inside, tourists may find some documentation achieves like pictures and statues. The other important features are the president’s vehicles, Joang 45 Cinema, and an exhibition hall.

Exploring Joeang 45 Museum
The most attractive part of the museum is definitely the cinema. It shows a historical film regarding Indonesia’s Proclamation of Independence. Apart from watching it, the guests are allowed to buy a copy of the film. This way, it becomes a perfect souvenir for them. Near to the cinema room, they can also find some half figures of national figures. The color is golden and they are located near to historical pictures of Pemoeda Menteng 31. With all those valuable attractions, visitors won’t get disappointed in spending time at the museum. Even it becomes a suitable location for a family vacation.

The next room is the small one, storing documentations that relate to Bung Hatta. These include an old chair, photographs, and a working desk. All of them emit a rustic ambiance. Once tourists explore the room, it is time to head to the library. The location is near to Hatta’s room, after all. Despite the small size, it offers valuable history and knowledge. The location is on the left side of the main room of the museum and visitors are allowed to explore it wholeheartedly.

In the back of the room, there is a wide open area, where two separated buildings reside. It is the place to store presidency vehicles, actually. The license plates show REP-1 and REP-2, as those vehicles were used by both president and vice president in the past. Once tourists explore all the rooms, it is time to relax and enjoy some snacks in a canteen. The fact is the museum provides such facility, which is located in the west part of the building.

How to Get There
The museum resides in Menteng Raya Street 31 and it belongs to Central Jakarta City. From Soekarno-Hatta Airport, tourists can rent a taxi and head to Menteng Sub-district. It takes about 40 minutes, as the distance is 31.6 km. When it comes to the fastest route, it is Jakarta Inner Ring Road.