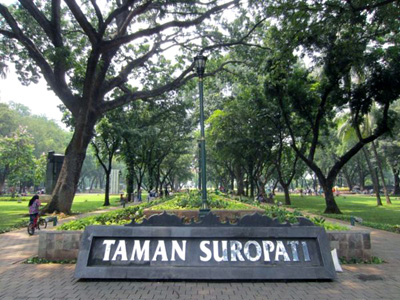 A big city is related to stresses and pollution. Jakarta is not an exception. Those who live in such special region should be smart in choosing a tourist spot. At least, the site should help them to relax and eradicate stresses. Here is the reference. The name is Suropati Park and it is located in Menteng District. In the past, the place was called Burgemeester Bisschopplein. It was derived from the name of the first Batavia Mayor. Apart from its beauty and serenity, the park is famous for its strategic location!

The Nuance
The park changed its name into Suropati in 1920 and had been attracting tourists from different regions. Here is the fact. Many people call it as the zero point of Indonesia. Not to mention it offers many types of attractions, including lush trees, plants, statues, and small lamps. Actually, the most famous objects are the monuments of United Southeast Asia Nations. All of them have a good condition, as it is well-maintained by Jakarta Landscaping Service. On top of that, the grass looks beautiful and fresh! Thus, all of those features create a stunning ambiance in the park.

Exploring Suropati Park
The most attractive lure of the park is definitely the nuance. This explains why visitors often come to Suropati Park in the morning. They want to enjoy the refreshing atmosphere and fresh air of the site. Some of them also perform jogging and exercises. On top of that, tourists have an opportunity to meet new people. For families, the park becomes a great location for family outing and recreation. That means it suits both adults and kids! Even couples would have a romantic moment there.

Apart from recreation, Suropati Park is also famous for history. The fact is it was the part of colonialism era. The location is in Menteng, which resides near to Jakarta Governor Office. Not to mention it is situated near to the home of the United States’ Ambassador. No wonder, it is a little bit strict when it comes to photography. It is because the area is well guarded and monitored. Have no worries. The park is quite accessible for everyone, as it requires no entry fees. The thing is visitors should never litter or damages the plants.

According to local people, there is a special performance every Sunday. It is done by a musical community, which is called Suropati Park Chambers. These musicians choose the park as the spot for both practicing and performing, after all. In fact, the member has reached up to more than 100 people. Most of them are guitar players and violinists. Due to their presence, the park becomes merrier and interesting for visitors!

How to Get There
The Park is located in Taman Suropati Street, Menteng District. From Soekarno-Hatta International Airport, travelers can take any local transportation service to Central Jakarta. The distance between the airport and the park is 31.5 km, actually. That means it takes about 50 minutes to reach the location. The best route to use is Jakarta Inner Ring Road.