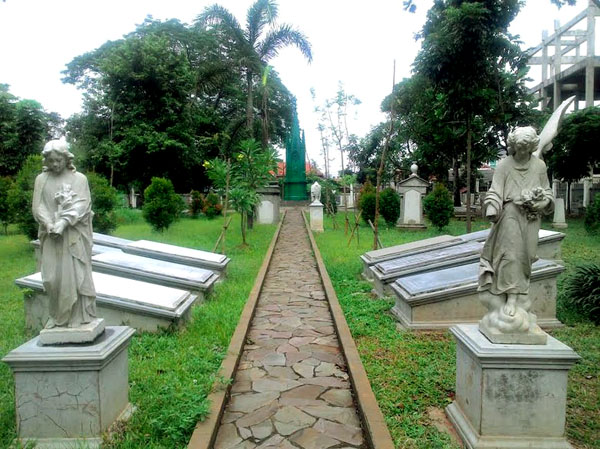 Both local and foreign tourists have recognized how important Jakarta is. Apart from being the capital of Indonesia, it also becomes travelers’ vacation destination. Thanks to the presence of several historical museums. People can learn lots a lot regarding history and culture in those places. One of them is called Taman Prasasti Museum and it is located in Central Jakarta. Surrounded by a serene atmosphere, the museum has become the part of history. It is the home of numerous tombstones of important people in the past. That means visitors can learn a bit about those people’s story when visiting the museum.

The Nuance
Once tourists arrive at Taman Prasasti Museum, they can feel the serene and shady atmosphere. It is because the museum is surrounded by trees and bushes. In terms of appearance, it looks old and neglected. No wonder, some people consider it a spooky place. In front of the building, there are old cannon and the sign of the museum. That location often becomes an object for photography, as people take selfies in front of the cannon. Also, not many people are seen there. Only some passionate tourists are wandering and learning the history of the building.

Exploring Taman Prasasti Museum
According to history, the museum was inaugurated by Ali Sadikin in 1977. At that time, it was only a regular cemetery called Kebon Jahe Kober. No wonder, the mystical aura remains until now. Some people even feel the dark nuance once they approach the museum. When it comes to the size, the structure is considered moderate. The width of the land is about 1.2 hectare, actually. With such gloomy atmosphere, some tourists consider it as dark tourism. The place represents the death, suffering, and despair. Still, it is an interesting tourist spot to visit.

Aside from the gloomy nuance, Taman Prasasti Museum offers a charming architecture. The building applies a combination of Javanese-Hinduism concept and neo-gothic design. The main structure was built in 1844, so it has been part of the history, even before the independence of Indonesia. In front of the old tombstones complex, there are several structures, coming with Doria design. The location was used to store the corpses prior to being buried. With those interesting structures, many photographers and filmmakers often come to the location to use them as backgrounds.

One of the most famous tombstones is Captain Jas’. The locals believe it as a sacred burial site that gives both blessings and luck to people. The other famous tombstones belong to Olivia Marianne, Soe Hok Gie, and Miss Riboet. They are all worth a visit and exploration. The thing is the museum doesn’t open on Monday and any holidays. That means visitors should only come between Tuesday and Sunday. It opens from 9 am to 3 pm.

How to Get There
The museum is located in Tanah Abang 1, South Potojo Village. It belongs to Gambir District, actually. What people need to do is to take any local transportation services to Central Jakarta and Gambir District.