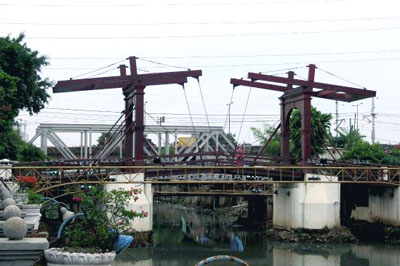 A beautiful landmark called Kota Intan Bridge becomes a new attraction in Jakarta Special Region. That means tourists should never miss the opportunity to witness such majestic landmark when visiting Jakarta. It is because that tipping bridge is both beautiful and historical, which is made of both wood and steel. Not to mention it is situated near to the Old Town area, so tourists can reach the bridge easily. In terms of name, the locals also called it Pasar Ayam Bridge and it has been there since 1628. Despite the old age, the condition remains good. Thanks to several renovations back then.

The Nuance
Due to its unique appearance, Kota Intan Bridge never ceases to amaze tourists. The color is maroon and it is made of both wood and steel. The tipping bridge keeps functioning until now, so visitors can even observe wholeheartedly. Not to mention many trees and beautiful plants grow near to the location. With all those attractions, photographers would definitely love it. Also, the locals often visit it in the afternoon. They want to feel a serene and romantic nuance, especially during the sunset.

Exploring Kota Intan Bridge
Apart from being a spot for hanging out, Kota Intan Bridge also tells interesting history. During the reign of the Dutch, the name was the Engelse Brug or Britain Bridge. Why was that? There was a base of Britain Army back then. Later, the name changed in 1900 into the Het Middlepun Brug or Central Bridge. The reason was none other than the domination of the Dutch central government in such area. In terms of function, the bridge becomes an access and inspection area for any ships that either entered or left Sunda Kelapa Port.

The next activity is to enjoy beautiful views, which surround the bridge. It is true Kota Intan Bridge is quite old, but it remains in its majestic shape. Plus, many features surround it like river, trees, plants, and cityscape. The water of the river is clean! Thanks to the management of the local government. That means the bridge becomes a perfect spot for relaxing and enjoying nature. No wonder, some photographers are often seen there. They want to capture stunning views of both the bridge and its surroundings.

Apart from being a recommended tourist spot in Jakarta, Kota Intan Bridge also holds a mystery and urban legend. The rumor has it. Some people had seen paranormal activities in the location, such as the appearance of the Dutch woman and soldier ghost. The locals call such female ghost as Maria! The fact is the bridge is located near to a big banyan tree that comes with 10 meters of height. Also, there is a train track near to the bridge, which often took casualties due to accidents. Despite the thrilling stories, it remains popular as a vacation destination among tourists.

How to Get There
So, how can people reach the location? Kota Intan Bridge is situated in East Kali Besar Street and it belongs to West Jakarta. No entry fee is required in exploring the location, after all. Tourists only need to pay for the bus fee. The route is Blok M – Kota.