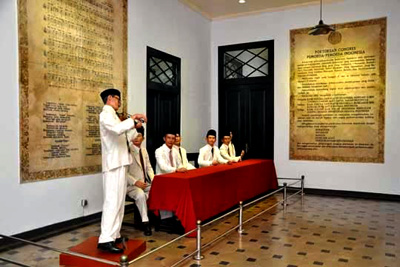 Some travelers are into historical places. In this case, Sumpah Pemuda Museum is considered a good place to visit. The location is in Central Jakarta City and it has been there for decades. In fact, it was the part of the Dutch Colonialism Era. Not to mention it has undergone several changes in terms of function. At the first time, the building was the home of Sie Kong Liang. It was constructed in the 1900s. Also, it was used both for studying and resting. People called it Commensalen Huis back then. Later, the government used it as a historical museum, especially to commemorate the National Youth Pledge (Sumpah Pemuda).

The Nuance
In terms of size, the museum has moderate proportions. The building has the nuance of the Dutch architecture. That means visitors would expect tall doors and windows. In front of the museum, there is a sign board, stating the name of the building and address. When it comes to the environment, it is neat! Some guards are also seen in the location. Inside, some figures are arranged well, representing the creation of Sumpah Pemuda. On the wall, there are giant texts of such pledge. What’s more? The museum features several rooms, on which the guests can explore, too.

Exploring Sumpah Pemuda Museum
Tourists can do many activities in the museum. For instance, they can observe the figures like Muhammad Yamin, Sugondo Joyopustpito, who attended the Indonesian Youth Congress II. Sugondo was the leader and Yamin was the secretary. In fact, there are some real photos of such event. In the pictures, 750 people attendants were there. Next, visitors should reach the corner of the main room where historical photos reside. Near to the pictures, there is the text of the struggle of Betawi Youngsters and other youth organizations before the creation of Sumpah Pemuda.

The next adventure is in the middle part of Sumpah Pemuda Museum. Usually, the spot is used for conducting an exhibition. Near to the room, there is a library, on which tourists can visit. Not to mention it features some old equipment of scout. With all those historical items, it is likely the guests would spend some minutes to take pictures and selca. Another fun thing to do in that room is to learn historical stories. The management would offer some performances there. Usually, it is related to important people like Doctor Moewardi or others.

Next, it is time to go back to the front room and head to the left wing. In that room, tourists can learn everything about Wage Rudolf Soepratman. The man was a musician and he was the one who wrote Indonesia Raya – the National Anthem of Indonesia. As a violinist, he died too early. The fact is that he was also a journalist and teacher. He was even the part of a musical band.

How to Get There
To be exact, Sumpah Pemuda Museum is located in Kramat Raya Street 106. It belongs to Senen Sub-district, Central Jakarta City. From Soekarno-Hatta Airport, tourists can take a taxi and head to Senen. The trip takes about 40 minutes and the distance is 26.4 km.