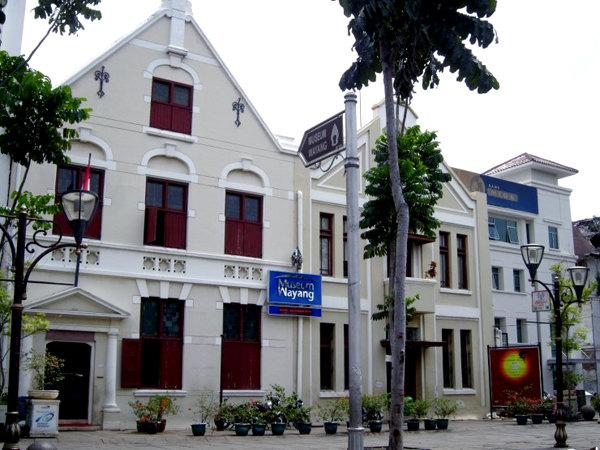 Many types of attractions are available in Jakarta Special Region. That means tourists can explore the city wholeheartedly and find new places to visit. Located in North Pintu Besar Street 27, Wayang Museum is a worthy tourist spot for everyone. Wayang means “shadow puppets, actually. Like the name implies, it is the place to witness the collection of such pieces of arts from all over the regions in Indonesia and other countries. The museum is located near to other museums, as well. It is because they belong to the Old Town of Jakarta.

The Nuance
The size of Wayang Museum is not as big as its neighbors. However, it stores lots of shadow puppets, coming from Sunda, Java, Lombok, Bali, Sumatra, and other countries. According to the keeper, there are about 5,147 pieces of shadow puppets, which are stored in the museum. From the outside, the museum looks like a regular Dutch building, painted in white. There is a blue signboard hanging on the wall, so tourists would notice the building easily. Some trees and streetlamps are also seen outside. When it comes to the interior, the museum is clean and neat!

Exploring Wayang Museum
One of the reasons in visiting Wayang Museum is to learn about its history. The fact is the museum was called Batavia Museum and it was inaugurated by the Dutch Governor called Tjarda Starkenborgh. After the Independence of Indonesia, the museum opens for public. It was in 1975. The concept of the design was Neo-Renaissance, but it was renovated in 1938. Here is another important fact. There was a church before the museum was built. However, it collapsed due to a big earthquake. That means the museum stands on the land, where the church stood before.

Once tourists enter Wayang Museum, they may see a couple of “Ondel-Ondel (traditional giant dolls of Betawi). Apart from the collection of shadow puppets, visitors can find equipment and tools, which are used to perform a shadow puppet performance. These include Lampu Blencong and traditional musical instruments like Gamelan. The fact is that Wayang doesn’t always represent shadow puppets, but other types of traditional dolls, including Golek, Suket, Beber, Intan, Seng, etc. Even a famous doll Unyil can be seen there. It was used in a renowned 1980s TV program back then.

In the midst of the building (the base floor), there is a garden called Taman Museum Wayang. In the location, visitors can see some reminiscences of the Dutch. There is also a room called Punakawan, which is used for numerous activities. These include small performances, seminars, and much more. Near to the exit, there are some vendors selling souvenirs and interesting items! Not to mention toilets are available in the building.

How to Get There
Wayang Museum belongs to the Old Town area. To be exact, the location is in Pintu Besar Utara 2. It is situated in front of Ceramics Museum and tourists can reach it by either a busway or Commuter Line. The destination is Harmoni Shelter and head to the Old Town.